It’s been two months since I visited Amsterdam and quite frankly I am desperate to get back, but maybe only for a little weekend retreat this time. In order to commemorate the visit I am going to write a few pieces about my visit to be uploaded over the next few days, enjoy!

My boyfriend Tom and I spent five days in the city, meeting a few his friends who had flown out a few days earlier. The first day was very busy- get to Birmingham, get the plane, get the train to central Amsterdam, tram to accommodation, drop our stuff off, venture out to Dam Square to meet his friends, go to the Zoo, spend a couple hours too long in a park (Amsterdam gets a bit weird after dark), go to some bars, eat a cheap burger while watching the World Cup Final (yawn), go to red light district, go to some more bars, crash in a tired heap on the bed. It was all quite overwhelming so I was quite looking forward to chilling out the next day. 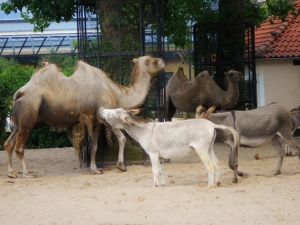 Tom’s friends had stayed in a hostel smack bang in the tourist mecca of the city center while we opted to stay with a couple renting a room in their apartment a little further out in Jordaan. Cris and Julian were lovely and recommended a variety of places to visit and eat at. The first place we tried out was Pancakes, no surprise what they serve there. I enjoyed a savoury pancake with delicious smoked dutch bacon fried into it and it seemed that we chose the perfect time, nabbing the last table before a huge queue formed outside. 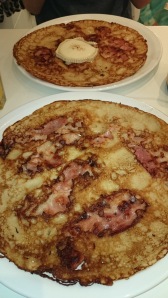 We then ventured into the city center to take in some everyday culture of the city and its inhabitants, everyone seems so calm and laid back, maybe it’s the coffee shops but I’d like to think there’s a little bit more to it than that. The only thing that’s not so chill however is the roads, attention is especially key when there are cycle paths and tram lines to consider as well as the cars. That’s one thing my simple little mind and I do not miss.

One place I did not expect to visit in Amsterdam was a library yet we did, and oh my, it was quite something to take in. First there was the sheer size of it and the little music pods in which you could preview some of the library’s music. Then there was the incredible buffet of food that I regret not taking any pictures of, it was so beautiful I could cry. But most of all was the incredible view of the city from the terrace eating area which I couldn’t not get a photo of.