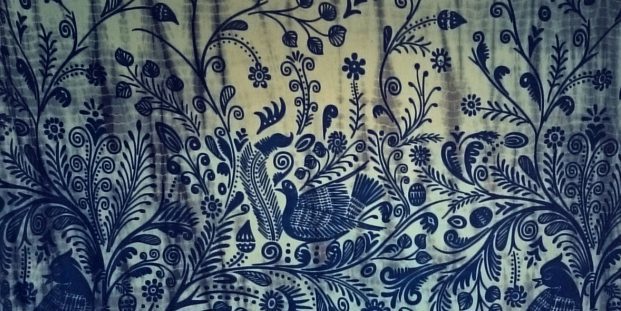 If you’ve read my previous post, you’ll know that the last month has been a busy one for me, moving into a new flat and having a lot going around me – it’s been pretty hectic. So this “Favourites” post is a little later than I’d normally prefer, still, better than nothing! I haven’t really had the chance to buy many nice things this month as any money that I’ve had has gone into paying rent for two places, fees for the new place and just generally staying alive. However, I have been lucky enough to try a few lovely things either by chance, or by earlier purchases that I’ve only now allowed myself to use, or as a gift from a friend… 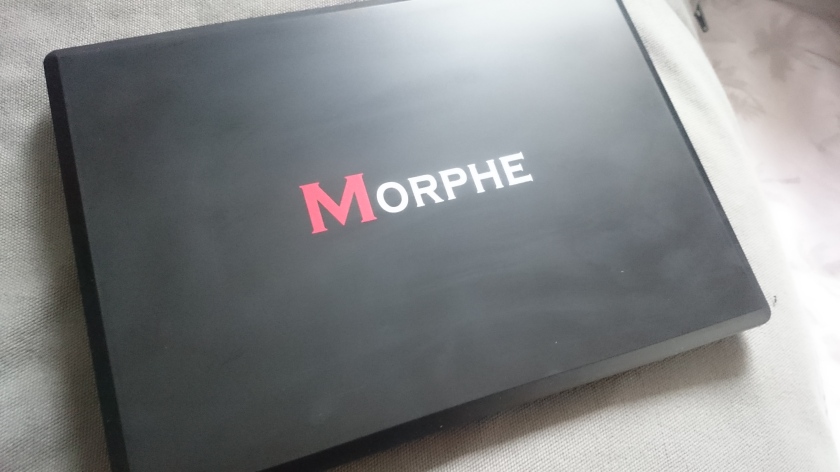 I’m not going to lie, I wasn’t really too aware of Morphe, being the make-up dunce that I am, my discovery of this brand happens to come down to a happy accident. My sister had asked for one of these for her birthday, unfortunately when it came to delivery, the palette ended up being thrown over the garden wall, because, you know, no one was in and what else would you do in that kind of situation? POST A SLIP THROUGH THE DOOR MAYBE? I don’t know what it is about postmen/women in the Kent area, but before now we have received a slip saying that the parcel had been left in the recycling bin for safekeeping, makes total sense right?

Back to Morphe, of course the palette suffered some damage at some point *cough* in the delivery process, rendering it not quite the perfect sweet sixteen present my sister was after. An email, along with some photos, was sent to Morphe expressing disappointment with the now broken palette and they ever so kindly sent a new one at no extra cost the following day. Top marks to them. Now this isn’t just me raving about their customer service (but believe me, it seems ruddy excellent), no, my sister now had two identical Morphe palettes. What on earth was she going to do with the broken one? Duhh, let her lovely big sister have it. Sure it was damaged, but really there was only one shattered colour, one of many black shades, which frankly, I barely go near anymore. Winner. 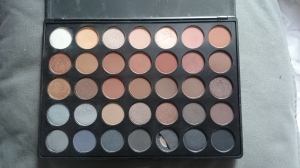 Thing is, my sister was utterly disgusted at my lack of awareness of what I was about to own, as I shrugged carelessly and said “I’ll have it”, when asked what to do with the damaged palette. Something she’d been after for months and I ended up with one in my lap within seconds of knowing what it was. Anyway, enough story telling, let me tell you about how much I love this beautiful palette.

1. It has all the colours I could hope for in a nude/smokey palette.
2. The colour pay off on them is incredible.
3. The colours actually last, even without primer.

I’ve only been using this palette for about a week now but I love it so much and it has come just in the nick of time – I was about to splash out on an Urban Decay palette but this one should see me through a little longer before that needs to happen. Phew. Although, who knows, maybe that money will go towards another Morphe.

In summary, if you’re a delivery guy/lady/none of the above, maybe don’t throw post over garden walls, but also – I guess I do kind of owe a thanks to the particular postie who got me a free palette…but mostly thanks to Morphe for being a fantastic brand that I will certainly look into further.

This is a book that I’ve been picking up, putting down, picking up again and putting down again every time I pop in to Urban Outfitters. This month I finally caved and bought it (for almost half the price off Amazon, got to catch a bargain right?). I’ve read it in the bath, I’ve read it in bed, basically any time I’ve wanted to feel calm, it has had my back. I also downloaded the app to go along with it because, well for one, I got a little impatient while waiting for it in the post, and two, it just kind of made sense. This is the kind of self help book that doesn’t push a load of complex ideas and feelings on you, it doesn’t even really feel like a self help book – it doesn’t make it seem like there’s anything wrong with you, it pretty much just states the obvious – the things we tend to forget when we’re stressed, sad, lonely…whatever. It does exactly what it needs to do, leaving you free to dip in and out of its comforting pages, picking and choosing what bit you read today, what bit you read tomorrow. There is however, some organisation to it, an order of themes and chapters, but you’re free to roam the pages at will. Read one page ten times over before even glancing at the next, it’s up to you. Calm is there with inspirational quotes, tips for unwinding, and interactive pages on which you can talk about your day. I basically really love this book and recommend it to anyone in need of a reminder to worry less and well, keep calm.

I know, I know, late to the party much? I started on the first episode a few months ago, to see what all the fuss was about. About 10 mins in I decided it was trash. Then a couple of weeks later I was wanting answers. This was good trash. Brilliant trash. So trash it’s not even trash anymore. I can’t remember exactly when I started watching this properly but you can bet that all this time I should have been writing, I’ve been stuffing my face with chocolate as I get one step closer to finding out who ‘A’ is. Don’t worry, no spoilers here. I’m currently on season five, knee deep in the trash. I am so obsessed with this show in fact, that I stayed at my old house longer than I needed to when cleaning it all out, just because I didn’t have internet at the new place yet and this was a perfect opportunity for catching up with my PLL addiction. Watch it, love it and hate yourself, it’s wonderful. 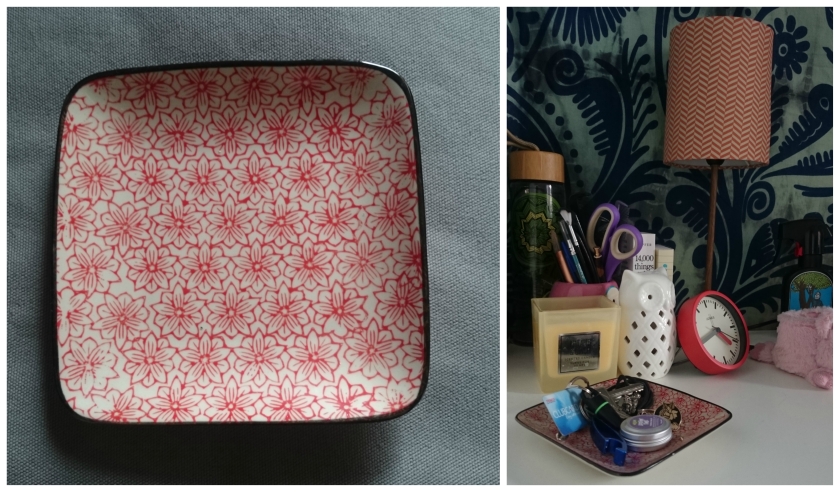 Remember when I went to Brighton? Remember I said I that I bought some things, that I didn’t want to go on about them but they’d probably feature in a favourites in the near future? Well ladies and gentlemen, the time has come.

Now, if I had all the money in the world and didn’t have to trek back on the train to Southampton, I would have bought so much more than a teeny tiny plate from Oliver Bonas. This shop is soooo up my street, and as soon as I saw this little plate I just had to have it. Perfect for my bedside table. Of course I wanted to save it for the new place. So that’s why I’m only talking about it now, after a month of being wrapped up and stored away, it’s out in my brand new bedroom, finally fulfilling its destiny.

At the moment I’m using it to hold my keys and odd bits and pieces, such as pin badges and any jewellery that I happen to be wearing on a regular basis. It’s a cute little accessory and to top it all I managed to nab it in the sale for under a fiver. Oliver Bonas I’ll be back for bigger things, soon. Hopefully. Fingers crossed. Praying for a miracle. That being said, although they can be a bit on the pricey side, there are definitely some affordable pieces in Oliver Bonas, I mean I was happy to pay the full price of this plate, the sale was just a pleasant surprise. Of course the bigger you go, the quicker that bill grows, but it all seems pretty much worth the money as it looks very good quality. (Nevertheless there is always room for crafting your own piece of furniture that doesn’t look too dissimilar from most good quality brands out there – it just depends how creative you feel).

I’ve never really received flowers before. Then the day that I move into my new flat, I have a Bloom & Wild box waiting for me. I was very confused, I didn’t recall giving my new address to anyone yet.

Except I had. One of my friends from school is getting married in July, so when she asked for my new address I assumed she needed it in case she needed to send anything wedding related in the post. She’s also perhaps one of the most organised people I know, so her asking for my address just kind of made sense and I never questioned it. Essentially, as quickly as I sent her my address, I forgot about it. The very lovely Naomi had sent me a beautiful bunch of flowers, mostly as a house warming present, but it also happened to be a reminder that even though we can go so long without talking, she’s still there. Even in the last few months of her wedding planning/arranging, this amazing friend of mine was thinking of me. That was enough to put such a smile on my face, making moving day all the more special.

The biggest thing about this month has been my move. Finally, I am out of my rubbish house share, where I was  confined to the same four walls most evenings – eating, sleeping, hanging out, all in the same room. It all just got a bit boring and drove me mad. Of course I wasn’t the only one living in a place that wasn’t quite my own.

A friend from work, approached me a few months ago about looking for a flat along with her partner so that they could get out of her parents’ place while still being able to save some money on rent. At the time we weren’t particularly close so it was a little unexpected, but you’d be surprised at how quickly the mere idea of living with someone can bring you closer. It took a while as we battled silly little laws about letting agents needing a license to rent a two bed flat to three unrelated people. We found a really nice flat, unfortunately it wouldn’t exactly have been legal for us to live there as trio.

Doesn’t really matter though because we found a great place, at a lower price, closer to work and most importantly, we were all actually allowed to live there. This new flat is by far the best thing to happen to me this month, I’m much more comfortable, I have a place that is actually “home”, not a room in a house with a bunch of guys who I don’t particularly hate, but don’t exactly get along with. Handing in the keys for that place was such a treat. Now I just eagerly await the return of that deposit. Got to get in all the bits for my next favourites piece and that. Oh and pay rent I guess.

Hi! I am a freelance writer based in Southampton, UK. Specialising in music and lifestyle, I enjoy digging deep and getting personal. When it comes to music, for me it is less about what “is good”, and more about what it conveys. As for lifestyle, anything goes. Open to collaboration and new ideas, get in touch! View all posts by Samantha Mae