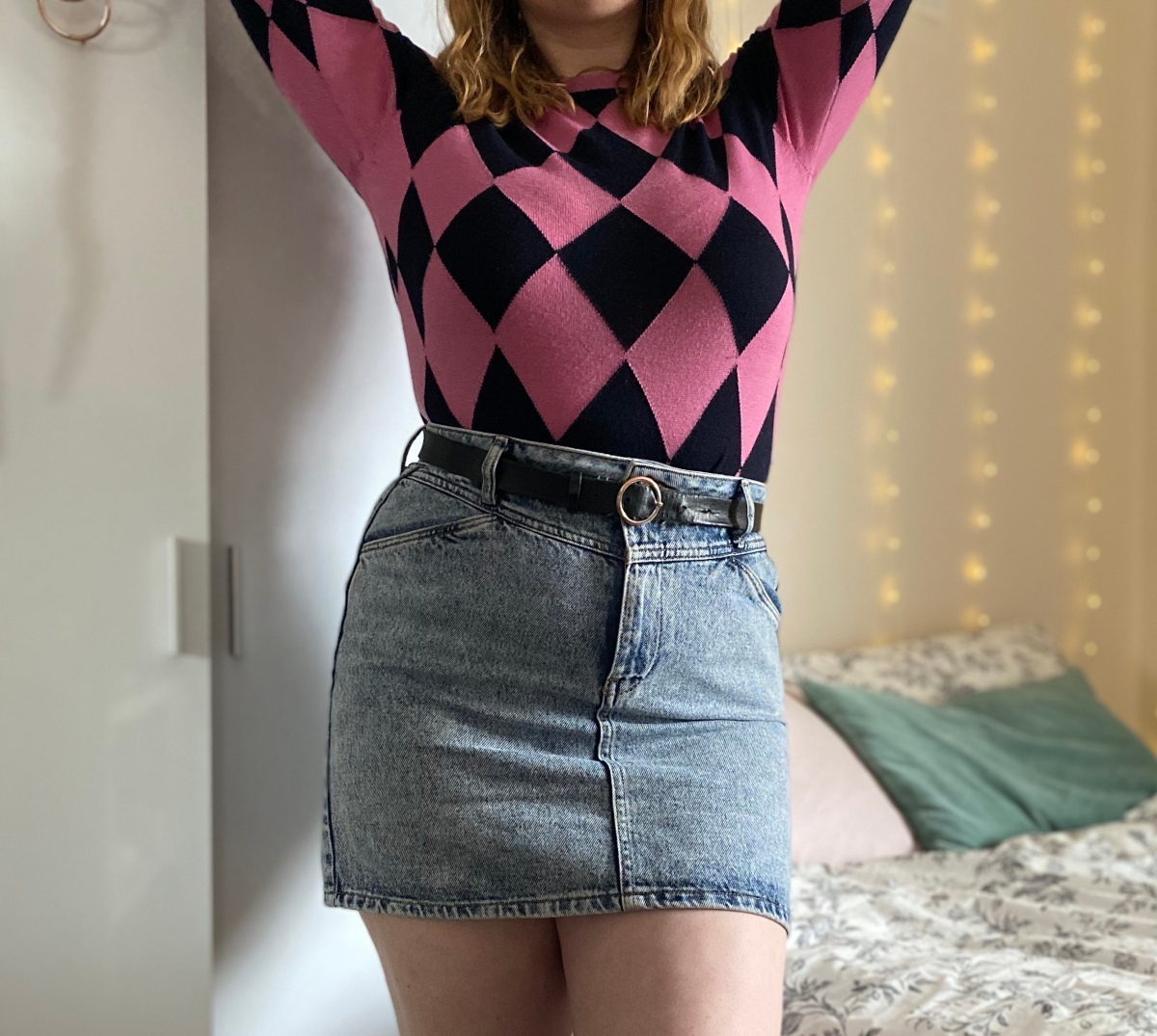 Boy, oh boy, January blues are a real thing huh? Still, ignoring the unemployment, January was a pretty sweet month. Of course it was my birthday, so any excuse for people to be me food and drinks as well as cute little gifts – I’m all for that, but it wasn’t just the material things. It was also the moments, the experiences and even the little life lessons that were my favourite things about this month.

Of course, it was a little about the material things so let’s start with something I had my eye on for a little while; the Mercury jumper from Saturday by Megan Ellaby.

I had been following previous collections before, pining for the wonderfully vibrant designs, but never taking the plunge. However, when the Mercury jumper was revealed, it was love at first sight. It isn’t necessarily my go to colour or design, but with Megan’s styling of it on her Instagram I couldn’t help but feel that I needed this jumper in my life. I kept looking at it online, not quite sure whether to make the spend, only of course to be egged on by my sister. I did keep looking at it after all.

Since receiving it I can absolutely say it is worth every penny. Not only does it feel lovely against the skin, it looks absolutely amazing; an incredibly flattering fit indeed. It is now quite the piece in my wardrobe, always getting compliments and comments about how colourful I look. There was one weekend not so long ago where I was sure I was going to wear it everyday, so it’s safe to say I will get my money’s worth from this perfect sweater.

Another item of clothing I have been loving this month is my pair of Ervin joggers from Lucy and Yak.

I ordered my joggers in medium and nearly exchanged them for the small but later decided that I rather enjoyed the extra roominess of these. I don’t often buy joggers so when I got these I wanted to make sure I had optimum comfort; not only physically but also with that peace of mind of buying into sustainable fashion. Yay, the environment! These wonderfully soft joggers are the ultimate for keeping me comfy on lazy days at home while also feeling somewhat put together. It’s official, I have broken the Lucy and Yak seal, and already have my eyes on their new Dallas trousers – oh sweet Cord!

Obviously there are some big favourites in the world of music this month, namely The Big Moon and Bombay Bicycle Club. No surprise there really since I have been waiting on both of these for months now. The Big Moon’s new album, ‘Walking Like We Do’ is an epic return to the charts and I am (avoiding using the term ‘over the moon’) ecstatic to hear new material from them.

As for Bombay Bicycle Club, releasing an album called ‘Everything Else Has Gone Wrong’, precisely for moments in life when you know, things go wrong – well damn guys, you got me. Having nearly cried (yes, really) upon first hearing ‘Eat, Sleep, Wake (Nothing But You)’ I should have known what was coming but still never expected to love the album quite so much. I think it was hearing a new song in a sound very much like the ‘old days’ that did it; something comforting and refreshing all at once. It might not be the most revolutionary album but having seen them perform it as well, it is clear that this is such a sweet release for the band. A strong sense of familiarity that certainly makes for a connected experience with the band.

I also took the opportunity to see Twin Atlantic at an intimate show in Southampton and ended up buying the new album that night – and got them to sign it of course. Call me seventeen again, because my love for Twin has been reignited. The new album, Power, is bound to be my favourite rock album of the year (I know it’s only January but I know me) and hearing some of it live with some of their older songs as well was just the best. I was even secretly a little glad that they had some technical issues as it meant that the band were forced to chat with the crowd and eventually play an acoustic track to fill the time. Of course the minute McTrusty said ‘acoustic’, the whole crowd were requesting ‘Crash Land’, so much so that even when the gear started working again, they had no choice but to play it, planned or not. It’s a big fan favourite so was such a delight to hear and sing along to every word.

The whole night was honestly the highlight of my month and I can’t thank the guys at Vinilo enough for being absolute beasts for putting on shows like this – there have been some brilliant ones lately! I also can’t thank Twin Atlantic for being absolute gents on stage and during the signing. A pleasure to watch and an absolute treat to talk to, one of my favourite bands forever.

Okay, so a big moment of January was realising that maybe I do want to push myself out of retail. It’s not that I don’t enjoy it. I love serving customers and interacting with people, but over the last few weeks I have come to realise that it is very much my comfort zone which has become somewhat stagnant. It’s not necessarily challenging me in the right ways and is not exactly in line with my passions. In all honesty I would just love to work in creating content; writing, social media and so on. Sure, not being kept on at my temp job was a big downer, but it also taught me a lot. Mainly, even if you want full time, make sure you’re open to part time jobs too, at least to tide you over. I mean the real kicker is now that I’ve realised I want to make a career out of writing, if I am looking at retail jobs on the side I of course would prefer part time. Typical, eh?

The thing is, had I been offered a part time job I would have complained about it and not considered my future at all. Blessing in disguise, silver linings – I’ve heard it all. Being unemployed, not being a taxpayer, it all sounds so wrong to me, and sure I’m going to lose a big chunk of my savings, but hey at least I had that money put away in the first place. I guess I’m lucky in that respect. The more time that passes without me having a job (believe me I am trying), the more I freak out, but there is the comfort of finally knowing what I want. Not only that but a wonderful network of friends and family to support me, be that with money or a good old laugh at the world. I may need reminding of it all but there is no doubt that I feel empowered to keep going strong. Keeping in mind that even when ‘everything else has gone wrong’, in the words of Bombay Bicycle Club; ‘yes, I found my second wind’.

2 thoughts on “January Favourites, and then some”