Ah home, where things change but people (mostly) stay the same. McDonalds has had a makeover but you still recognise all the people that work there. The bar you used to work at is under new management, but the same old regulars still sit in the same old seats, ordering the same old drinks. Fosters for the guy on the corner, a continuous flow of ale for the two sat by the door and a Guinness for the one who is always smiling.

There’s some comfort in the familiarity, as long as plans are being made and life is being full and plentiful, it doesn’t get boring at all. This particular visit home was mostly planned in order to see one of my dear friends from school get married (say what?!), however with initial plans for the beginning of July cancelled, my short trip back to Thanet turned into somewhat of a mini vacation. On the first night I went for dinner at the newly local Cafe Rouge. Last time I had been to Westwood Cross shopping center, this restaurant had been a Topshop, yet that night, instead of topping up on skinny jeans, I reveled in the french bourgeois atmosphere, tucking into a lovely dish of duck in orange sauce and dauphinoise potatoes. So scrummy.

Over the weekend my Mum and step-dad Jeremy went camping for a few nights, leaving me in charge of their flat for the duration of their trip, making sure the cat was fed and all that jazz. On the first night I enjoyed a breather from all the rush of seeing everyone and catching up with one another, prepping myself for a busy week ahead. The following three nights my sister stayed with me. Armed with my Netflix and her current obsession with Pretty Little Liars, you can imagine that our evenings revolved largely around scoffing our faces and having a full on PLL binge (the second time for moi). 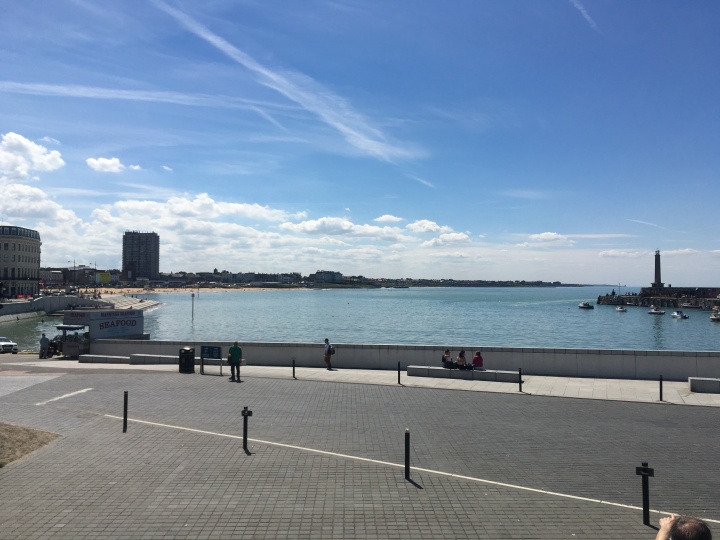 Throughout the week I visited the town of Margate, booming in its glory of the Dreamland amusement park, the Turner Contemporary gallery and everything else that is putting it back on the map as a top seaside resort. There’s a sense of pride in my hometown as I see it develop into something quaint and beautiful. With the sight of the sea and the boutique energy of the revived Old Town, Margate has really come in to its own, but more on that next month…

I had tried to visit Dreamland, unfortunately it was only open over the weekend during this time (as you’re reading this it should be open for business every day of the week). As I had a wedding to attend and other plans over the weekend, I had to give the amusement park a miss this time, but I’m heading back in August and will be sure to take a ride on the iconic Scenic Railway. Our next stop was the arcades along the seafront, where we spent a good amount of time feeling nostalgic and perhaps a little too eager to win a My Little Pony plush toy.

Speaking of nostalgia, most of my teenage years were in fact spent roaming the streets of Ramsgate, a town just a couple of train stops away from Margate, and where I went to secondary school. It only made sense then that Christine and I take a walk across its cliff side and grab an ice cream down the beach. Even though this wasn’t necessarily how we enjoyed Ramsgate way back when, it gave us time to notice little things we had neglected over the years. For example there’s a bit by the beach where some houses and flats are situated underneath a road that takes you back to street level, and if you look closely in some of the buildings you can see arches in the architecture, following a sort of viaduct fashion, nodding to what had been there before. I don’t know, maybe we’re getting old and noticing that instead of the young skater boys who may have previously caught our eye, but we found it pretty interesting.

Now here’s the exciting bit. Saturday comes around, it’s time for a wedding. Not just any wedding mind, this is one of my best friends’ wedding. When Naomi and William announced their engagement we were all over the moon…and also a little freaked out about the idea that we are now adults and our friends getting engaged is totally normal. Since moving to Southampton for uni and staying there for my job, my ability to keep in contact with my friends has proved to not really be all that good. That doesn’t really seem to matter though, for the most part I slot straight back into Thanet life, and as long as I let people know I’m about, I get to catch up with old friends as if I’ve not even been away. This works out pretty nicely, as I end up having lots of stories for them, and vice versa. My only concern is that I make sure to get in contact perhaps the week before my next visit for some real vigilant plan making. 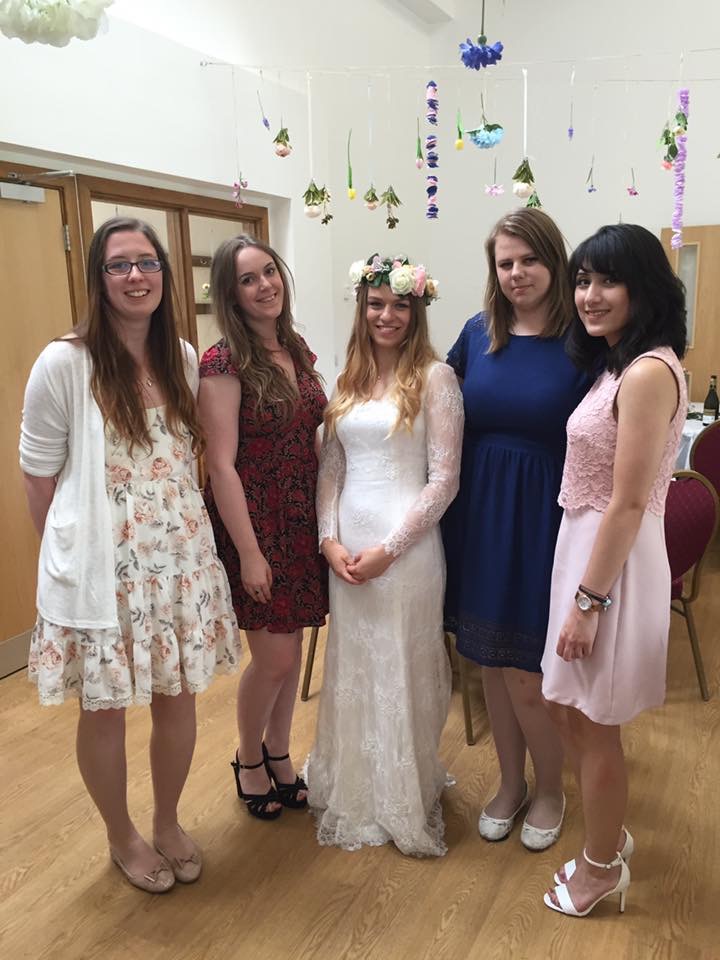 That being said, the wedding not only brought my little group together, but also reunited me with more school friends who I probably hadn’t seen since leaving for Southampton. We caught up, had a laugh, and most importantly celebrated our friend’s big day together. So let’s talk more about this big day. Safe to say that Christine and I were pretty keen to make our way there as early as possible – for one thing, it’s a wedding, can’t be late, and another thing, there’s always someone who may run a little late (if you’re reading this you know who you are, and you know that we love you all the same). So we left early, thinking the venue was a little further out than it really was. This resulted in us arriving an hour and half before the ceremony started, oops. Never mind though, I maintain that if we had arranged to leave later, we’d would have run late, hit traffic, SOMETHING WOULD HAVE HAPPENED. I was just happy to be there. Plus we were able to help Naomi’s mum set up the last few bits for the wedding, saving her the panic and leaving her more time to get ready and enjoy her daughter’s big day.

The whole look of the wedding was so beautiful and everything was all their own work. From the lavender candles that Naomi had lovingly handmade as wedding favours, to the decoration of flowers above our heads in the hall, everything felt so personal and so suited to the gorgeous couple. Plus there was a pizza van outside, serving up freshly cooked pizzas to all the guests, score! 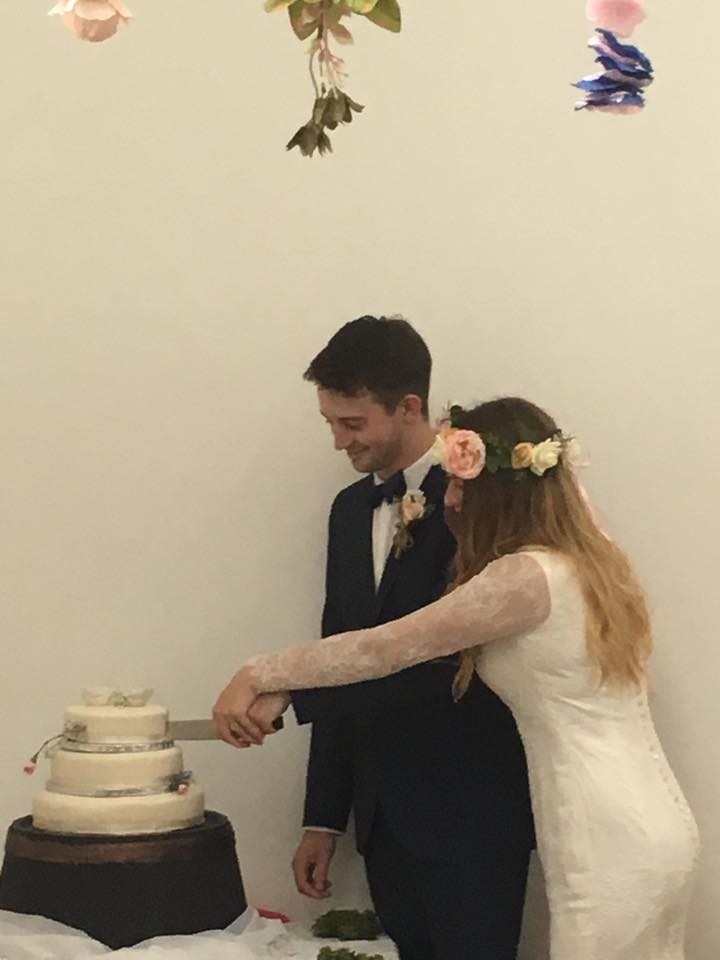 The service was lovely and the whole day was pretty emotional, from seeing Naomi walk down the aisle, her and Will making their vows and then seeing them head off to their new flat together, I may have held back a few tears. Our Nazmo/Nay is all grown up. Nope, not crying, just got something in my eye that’s all.

I think that’s the main gist of my little home vacay, I had a laugh, and it’s got me all pumped up for the next visit in August. My intentions of being a tourist in the place I grew up did not really succeed, so I’ll be giving that another go, however I did finally make a visit to a certain little cafe while I was there, so look out for a mention of that shortly. I do believe Broadstairs will be holding its annual Folk Week when I’m next down, so I shall spend a lot of time there, enjoying the activities as well as simply getting merry in the day time like I have done the last few years. Of course I will attempt Dreamland again too and relive my childhood. Can’t wait!

One thought on “Visiting Home Pt I: Reunions and Celebrations”