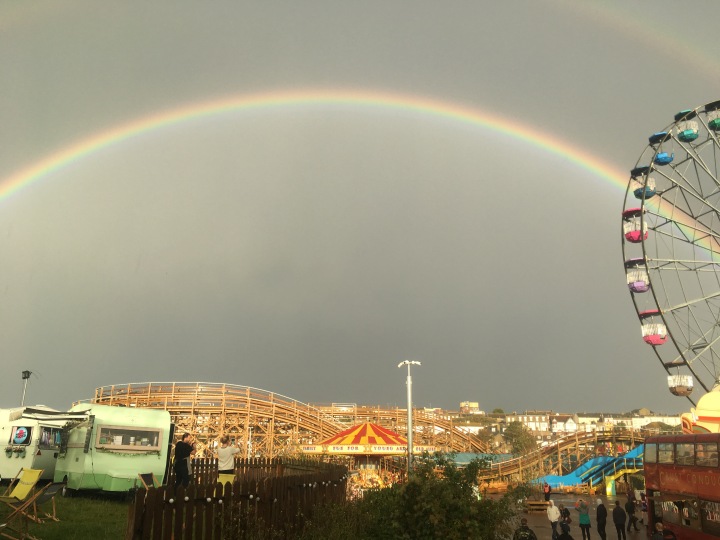 Here’s a piece I recently wrote for Vulture Hound, find it on the site here: http://vulturehound.co.uk/2016/10/by-the-sea-festival-dreamland-margate-festival-review/

Last year saw Margate’s newly re-opened amusement park, Dreamland, host Hot Chip and Foals as headliners for the first ever By The Sea Festival. The seaside town put on two nights of shows, with its success sparking interest for another show in 2016. Headliners this year included Wild Beasts andSuper Furry Animals on Friday, with Bat For Lashes and Wolf Alice on Saturday.

Bands alternate between two different ‘venues’ within the park, making for a back and forth pattern with no overlap, so no negotiations of who to see and who to miss, unless of course you are determined to nab a front row slot for the headliners. This years festival kicked off at Hall by the Sea with Tokyo Tea Room, a local band whose pop rock sound comes with a subtle tinge of psychedelica. Next stop is the Roller Disco, where we find the The Big Moon kicking up a storm in the form of an indie riot. They’re fun and they shine with a contagious chemistry, warming the crowd up for more to come.

Bill Ryder-Jones plays next, his gentle voice soothes, yet his guitar shreds. Ryder-Jones makes his music in his bedroom, “for people to listen in their bedrooms”, and this translates a great deal with his set. We might be standing in a large hall, but Ryder-Jones makes us feel at home.

Back in the Roller Disco we find the eclectic Meilyr Jones deliver a set that sees him take the crowd into a hypnotic state. He’s creatively energetic in a way that means you can’t look away, daren’t miss a moment, his presence on stage matching perfectly with the exuberance of his music.

Wild Beasts are on next, stepping up the theatrical side with big lights and a striking backdrop. The hall is packed and their music fills the room, each song played as an anthem. Their sound is crisp and the rhythms rumble through the crowd as people start to dance.

Mystery Jets follow in the Roller Disco, professing their love of the town that hosts them. They open their set with ‘Telomere’, a track from their latest album, Curve of the Earth, which sees them take on a stronger sound. They’re a little more put together, yet still pleasantly down to earth and their new tracks go down just as much a treat as their older numbers that they seem to be better known for.

Headliners Super Furry Animals play to an eager crowd, putting on quite the show, lighting the room up with lasers as they amplify their sound to doting fans who seem to be ecstatic that after a touring hiatus, the experimental Welsh band are back, and furthermore, in little old Margate. A fan of the band or not, however, there’s no denying that these guys own the stage, with minimal gimmicks and maximum sounds. With no new album to promote, Super Furry Animals are all about just doing as they do and it serves them well, with everyone in the room purely revelling in the music.

Saturday comes around and we’re raring to go and see the weekend out with a bang. Radidas are the openers today, a duo who bring a slow groove of psychedelia as well as shredding jams to boot. Their set is enigmatic and leaves you in a transfixed state that you just can’t shake.

Meatraffle kick things off in Roller Disco with an arrogant flavour of funk, which is not initially appreciated, but picks up later on. Next up in the Hall by the Sea are teen duo Let’s Eat Grandma who show off their range of musical instruments, from keyboard to xylophone and saxophone to recorder and everything else in between. Their haunting, grungey rap pop is performed in a doll-like manner, Rosa and Jenny letting their heads droop with the music, lying on the floor, clapping together and dancing on stage as if no one is watching. Except everyone is. They go from giving us deathly stares to smiling sweetly, both so in sync it’s almost as if they are two elements of one mind, mesmerising and looming all at once.

Meanwhile, the Roller Disco plays host to Strong Asian Mothers who make the room come alive with their colourful energy. It’s pop infused with a little twist of ska-like sound, striking in the moment, but not a lot of pay off once it’s all said and done. Quite the opposite goes for the next of the Roller Disco acts, as Anna Meredith brings her experimental take on classical instruments, starting off with a drawn out intro that seems to build up to nothing. In retrospect, what she was doing with her band is indeed interesting and something to look into, however it’s all at a loss when a large instrumental strings us along for little impact.

Over to the headliners – Bat for Lashes wears a red veil, reminding us of her new album The Bride. There’s no denying the beauty of Natasha Khan’s vocals, that girl can hold a note. It’s pleasant to begin with, however as the set progresses, Khan’s performance falls flat and fails to really go anywhere. Sat listening to that at home, or even a smaller venue would be no issue, but the set lacks the kind of growth you’d expect from a headline act playing to a packed out hall.

Wolf Alice are the last act to play the Hall by the Sea, with their last show before taking to break to work on new material. “This is our last show in 1,000 years” says frontwoman Ellie Rowsell, as the band perform wildly to the sold out festival. Guitarists Joff Oddie and Theo Ellis command their sides of the stage, Oddie in a world of his own, thriving around with his instrument, throwing it in the air, while Ellis dons a hi-vis jacket, as if his in your face attitude wasn’t enough for you to take notice. Meanwhile drummer Joel Amey seems shrouded in darkness yet his presence is clear as he beats us through the whole riotous affair.

Halfway through the set Ellis asks for Amey to have a spotlight on him, enough to make him “look like Jesus” as he performs a dreamy rendition of ‘Swallowtail’, his own track from band’s full length debut My Love is Cool. This and Rowsell’s ‘Blush’ hush the entire hall, making for a well earned break before the band return to thrashing through the rest of the set. As their performance draws to a close, Rowsell loses herself in the crowd as the rest of the band tear up the stage, Ellis collapsing into Amey, drums and all, before leaving. Wolf Alice’s hard work over the years, this last one in particular, has paid off.

It’s not all over just yet though. There’s a party brewing in the Roller Disco, as Australian psychedelic dance trio Jagwar Ma come to the stage with a set that’s so intoxicating, that all you need is the music to let loose. The band create a club-like atmosphere, people are simply having a good time, but also in a manner of appreciating the music being performed for them right there. Lead singer and guitarist Gabriel Winterfield takes a moment to choreograph the crowd for recent single ‘Give Me a Reason’ and they even bring out Jay Watson of Tame Impala for a song towards the end of the set. Jagwar Ma leave the people of By The Sea in high spirits with their infectious good mood.

By The Sea has had a successful second running and certainly calls for more strong events to come. There’s something to be said for embracing the charm of Margate, a town that’s really come into its own lately. Soft sands and a thriving creative community make for a striking contrast against the looming grey architecture, but it’s all part of a funny old package that you can’t help but hold a soft spot for. Whether time was spent seeing bands or riding the dodgems as Jarvis Cocker DJ’d as per his request, Dreamland Pleasure Park proved to be a colourful haven, situated behind a string of arcades and fast food restaurants that sit along the sea front. Effortlessly trendy and full of energy, it’s the perfect place for hosting a fun weekend of great music, and By The Sea was everything it promised and more.

One thought on “By The Sea – Dreamland, Margate || Live Review”