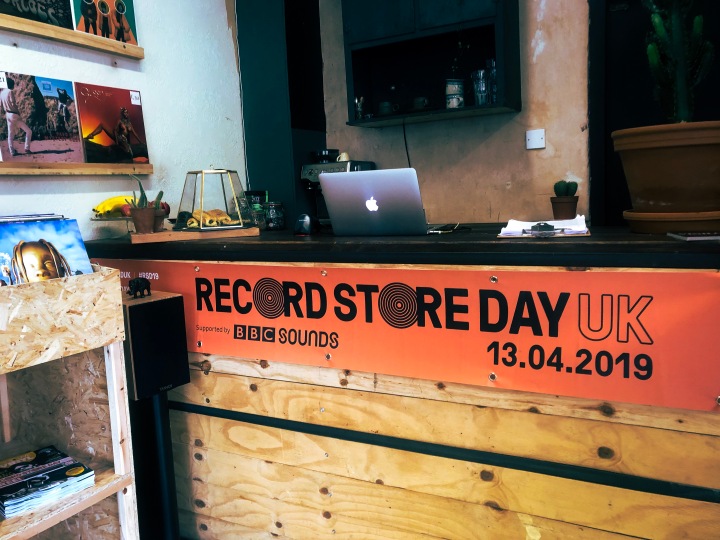 What are my plans for Saturday 13th April? Well, other than going on a road trip with one uni friend to see another, I’ll be heading out to check out some exclusive Record Store Day releases of course! Last year was my first proper go at RSD. I was foolish enough to think I lived close enough not to worry about be one of the first 50 that would be entitled to a free tote bag. We all know I’m a sucker for that kinda thing, so wanna know what number I was in the queue? 51. Hilariously frustrating to be honest.

This year I live a little further out and I am nearly tempted to get there way too early for what its worth, but I mean, we’ll see. After all I did hear that last year people were camping out from 11pm the night before. I don’t know about that.

A couple of weeks ago I had the pleasure of viewing the release list at Vinilo Record Store in Southampton, and was able to add a tick to the records I was most interested in seeing in store. Seeing as it has been a while since I last wrote about music, I decided to share my RSD wish list with you lot. Now this may not be a list of the best releases overall, but it is a selection of those that stood out to me personally, so here goes – my top 5 most wanted from Record Store Day 2019:

5. Weezer – Dusty Gems and Raw Nuggets: The B Sides

Now, I’m going to be real here, my main attraction to this one is the exclusive translucent blue & white swirl vinyl, that and a short lived mild obsession with the band a few months ago. To be honest I don’t have much to say other than this simply being an instant attraction to me. Due to budget cuts (living on your own is expensive didn’t ya know) I may not end up getting this one, however I would love to lust over a copy if anyone I know does cop one of these beauties…*ahem*.

I mean she just has a beautiful voice right? I’m not exactly a Julien Baker fan girl, but I sure as hell appreciate her. This is probably my go to for if everything else on the list is unavailable. Which I guess by default means I won’t be likely to go straight in for Weezer after all, but hey, it struck a chord so I had to mention it. I guess Baker and Weezer are the ones I wouldn’t mind having but wont be absolutely broken-hearted about missing out on.

Bowie. Picture disc. Need I say more? Now the catch is, I want this record, I really do, but deep down I know I only want it so I can show it off. As much as it would look beautiful in my collection, it’s not the be all and end all of what makes my collection ‘me’. To tell you the truth, there are only two records on this list which really showcase my personality, so I’ve decided to rank them highest, soz Bowie. That being said, I’m a sucker for a picture disc and if last year is anything to go by, I’m not great at control – but that is also why I’m making a plan of what I want most. I need a strategy or I’ll just panic and buy the first one I can find. However if this is available I might just have to. Ssshhh, what savings?

This is one of those records that I want purely for collection’s sake. The Boosh brings me such joy, as does buying records. Why not marry the two? Seems like a good enough reason as any to purchase a splattered vinyl that comes complete with artwork by Noel Fielding and Dave Brown as well as notes from Julian Barratt. Also…it’s a 3 piece? How good is that going to feel to open and swoon over? It’s not exactly the best on the list, but it is probably the most me. Maybe that’s cos I’m watching Boosh as I write this. The point is don’t judge me, I like what I like, and if I’m going to pick Boosh over Weezer or Bowie (yes, really), then so be it.

If you follow me on Instagram or Twitter, you may have heard me mention this band a few times. If you follow on both then all I can do is apologise. I love them. Mighty Boosh is a bit of me, but Our Girl is that more recent bit of me. I fell in love with their debut album last year, and absolutely adored seeing them live. Also it’s a clear vinyl. Basically it ticks all the boxes. The only thing that would make this release better is if I had heard actually heard them live at St Pancras old Church. This may be another case of collector’s temptation, but I’m pretty damn sure that this one will be leaving Vinilo in my hands; absolutely one that I’d regret not getting, so of course it had to be number one.

If I had my way (read: If I had all the money) I would probably buy all of the above and more. That being said, as much as I might try and restrict myself, we all know I’m going to end up with at least two records. My budget and desire for takeaways/eating out for lunch might not allow it, but I’m sure I can make some adjustments. After all, if there is anything I love more than food it’s music. Sure sometimes this changes depending on the mood, but I think we can all agree that on a momentous occasion such as Record Store Day, music comes out on top.

Whether you’re hitting up your local record store or venturing further out and making a day of it, let me know what you’re most looking forward to finding in the racks this Record Store Day. Make sure to follow my Instagram if you’re interested in finding out what I buy (I might even do a full feature, who knows?!) and how I might change my mind in the lead up to the big day.

Well tonight’s gig cured my hangover and made me v happy. Bloody love ya @twinatlantic ❤️💚💙 also shout out to @vinilorecordstore for absolutely killing it recently with all these album launch shows 🖤
You know when you consider yourself totally against the whole “new year, new me” thing and then all of a sudden you’re faced to make decisions in January which inadvertently lead you on to that very path? Yeah, wrote about it. Link in bio 💁‍♀️
Well happy that there’s a new bombay album out today 💛
Well I really bloomin’ loved this one and DID NOT suspect a thing oh lord, very excited for the next one from @lucyfoleyauthor 👀
Classic converse got me like 🤪
Leafy McLeaf Face
💀26💀
This book is making me rage so hard and I absolutely love it
I obviously love my record collection but what about my fave releases this year? LINK IN BIO BBY 🎧

Well tonight’s gig cured my hangover and made me v happy. Bloody love ya @twinatlantic ❤️💚💙 also shout out to @vinilorecordstore for absolutely killing it recently with all these album launch shows 🖤
You know when you consider yourself totally against the whole “new year, new me” thing and then all of a sudden you’re faced to make decisions in January which inadvertently lead you on to that very path? Yeah, wrote about it. Link in bio 💁‍♀️
Well happy that there’s a new bombay album out today 💛
Well I really bloomin’ loved this one and DID NOT suspect a thing oh lord, very excited for the next one from @lucyfoleyauthor 👀
Classic converse got me like 🤪
Leafy McLeaf Face
%d bloggers like this: